“I’m Diego Franco Permansu, long name, I know! I’m from Mexico and moved to Victoria almost 4 years ago and I’ve been loving it ever since.

I am kind of like the odd one out in the Nolan Riding family because I like racing cross-country cyclo-cross – all the stuff that requires pedaling really hard uphill, most mountain bikers are into the more downhill, less uphill riding.”

“My girlfriend wanted to study abroad and she asked me if I wanted to join – I gave her one condition – there had to be mountains. We looked at Germany, England and then at Edmonton, the East Coast and Victoria. I didn’t know there was great cross country biking on the East Coast, I thought it was all flat to be honest. So I was like ‘it has to be Victoria’ so she applied for a student permit and I managed to get a work permit.

And here we are, applying for permanent residence now!”

What type of work do you do?

“I studied mechanical engineering, but in the last years of my undergrad I started taking courses in graphic design and art. My mom is an artist and I wanted to do more of that. When I graduated, I got a job in mechanical engineering – I went with the flow. But I never really stopped to think about what I wanted to do with my life until we moved here, and I had a chance to start again – a fresh start.

Coming to Victoria, I got a job pretty much immediately working in graphic design. I worked there for just over 2 years, but it was still a classic 9-5 desk job, it was okay, but I wanted more than okay. After meeting the team at NR, I realized I could spend my summer full-time coaching, and now I’m trying to make my way more into the bike world. We’ll see what will happen.” 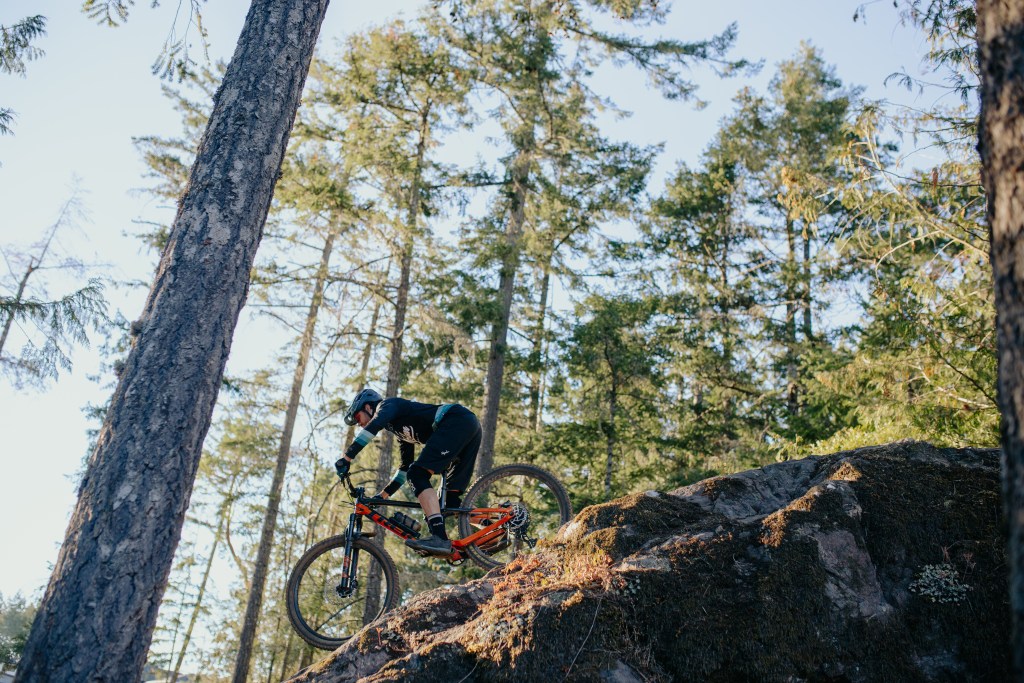 When did you start with NR?

“Oh that’s an embarrassing story actually, I got my PMBI certification last spring and then got my first aid shortly after.  A friend of mine recommended me to Pat and Merin and I started coaching last fall. I started shadowing, and then the 3rd or 4th ride I broke my hand while coaching so that was embarrassing. I was like ‘I never want to show my face here again ah!’ I took 6-8 weeks off the bike for it to heal, it wasn’t too bad but enough to not let me bike. I reached out again to start coaching again with them after once I got over the embarrassment and had a great season!”

What programs did you coach this past season?

“I coached summer camps of all ages this past summer at Hartland, Jordie Lunn, Cowichan Valley and some other spots. In the evenings, I coached private lessons and adult clinics. I liked getting to know my clients and people always recognized the NR jersey. Like, for example, I was finishing a lesson one night and a guy came over and asked me for recommendations on the trails and what loop to follow – he was asking if I was able to take him on a ride! So I got him signed up and we scheduled a ride the following week. That has happened a couple times, I think people see the NR jersey and feel more comfortable.

The first time conducting a bike camp, I was nervous. Pat gave me a hand for the first walk-throughs and then it got easier once I got the basics down. We follow a textbook but it’s also so great to work in variations and different techniques that work with some vs. others. Getting feedback from the students on what approaches are working is a really good way to learn. At the end of the day, they learn something and I learn something from teaching them.

Learning while teaching is the best part.” 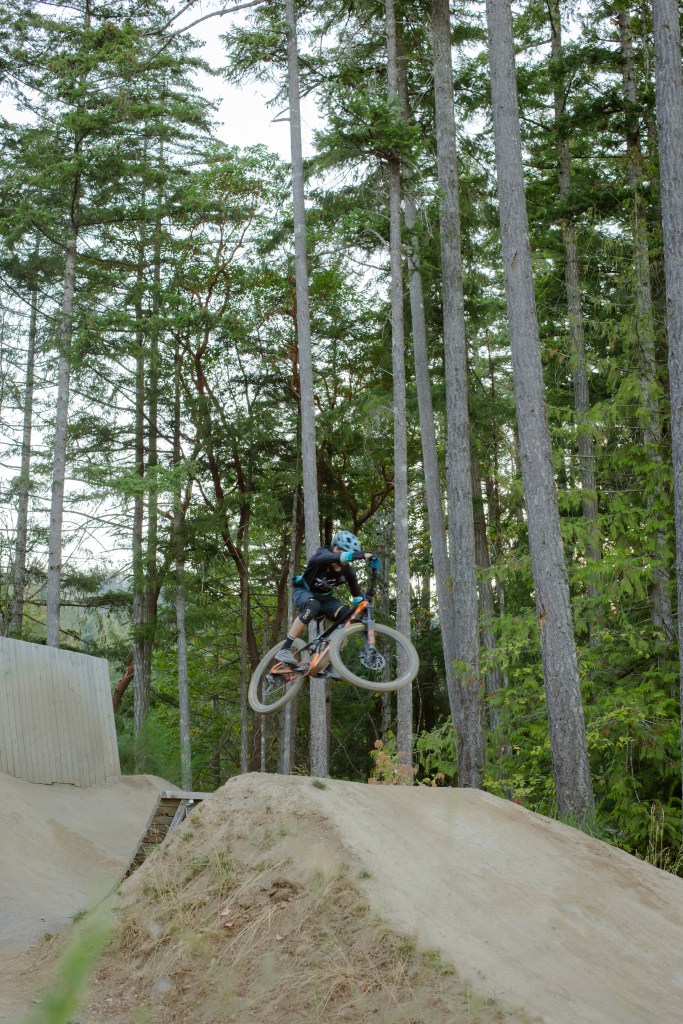 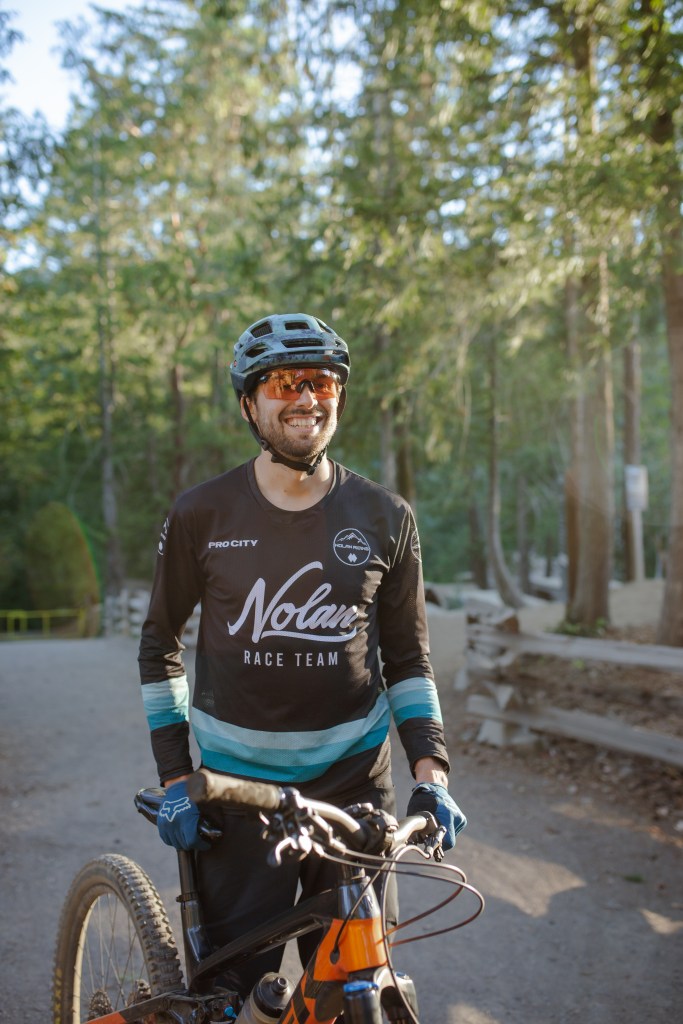 What does a typical day look like coaching with NR?

“A typical day in the summer is basically this: Breakfast – Coach – Lunch – Coach – Rest – Repeat!”

You mentioned private lessons, what does that look like?

“In a private lesson, the clients get to pick what they want to work on. It depends a lot on each rider. I’ve taught people who have never gone on a mountain bike ride before, also people who struggle getting on and off the bike. We start from the very beginning. We ride a nice open section of dirt and get them comfortable. When they’re very new, we start from the beginning with the textbook stuff, then later on we can decide what else they want to focus on.

With others, we work more on body position, how to use gears, any parts they are not confident in. And then we progress all the way up to as far as we can really make it throughout the lessons. Other riders are very experienced, so we work on one specific thing that they’d like to do – like cornering, jumps, or rock rolls for example. We will then spend most of the lesson tackling that one skill. We take them to different locations so they don’t get bored of hitting the same feature over and over and we just make sure they have fun and of course we keep them safe!”

What is your favourite part about coaching?

“When the client finally gets to do something that they’ve been working over and over again on, or when they struggle with a certain feature, and then they finally get it – I love seeing the look on their faces like that surprise, that rush they finally did it. To see that they are actually having more and more fun on the bike. I love those moments, coaching is all about that – making people progress on the bikes and have fun.

Less surviving on the bike, more riding, more fun, some lady told me that. She told me she felt like she was so tense and nervous on the bike that she was “just surviving” but with basic skills at NR she can now actually ride the bike, she was like I‘m having fun now.“

How does coaching fill your cup?

“I learn so much from coaching. While I am learning how to coach people on bikes, it applies to everything. I love to share what I know and I love to help other people with stuff that I know how to do. I love lending a hand. It is very rewarding!” 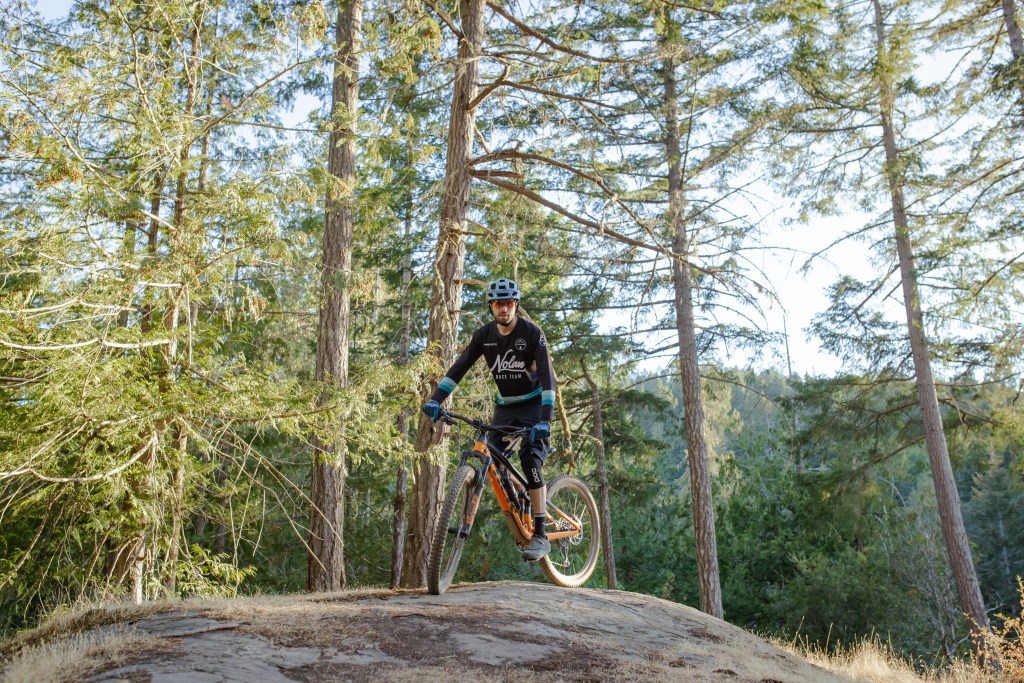 What is your favourite trail?

“At Jordie Lunn, I like warming up on Gold Rush and hitting Berm Reynolds. I love On The Rocks too. My favourite trail in south Vancouver Island I think would be Showtime at Mt. Tzouhalem.

You either love or hate Hartland, for me, I love it. It’s very techy and punchy [steep and short going uphill – you really have to put some power down to get up those hills!] I just love all the trails at hartland.

If I was going for a quick rip, I can ride from my place to Hartland and do a lap.”

“I like to watch the cross country world cup – specifically the female one. I like to watch the guys as well, but there is something in the girls that is just more interesting and fun to watch. Lots of them inspire me, I’ve followed them for a few years – I’ve seen them get injured, get healed, not do well, and take a step back, but still come back the next year stronger than ever.  To name a few, Pauline Ferrand-Prévot and Jolanda Neff. I think they are my favourites, I admire them.”

“Yeah I’m super involved in that right now actually! It is very exciting. When I was living in Mexico, I only rode cross country, I didn’t get a full suspension bike until moving here. So the couple times going back to Mexico have been so fun riding those trails on a different style bike. So now to go back with buddies, to Baja which is my fav place in Mexico, I’m stoked. It’s going to be really fun.”

“We haven’t decided much yet, but it’s looking like we’ll stay on Todos Santos, apparently they are building bike trails there. Some Canadian guys moved down there and started making trails, so it will be so cool to check them out.

It’s going to be biking, surfing, good food, maybe camping(?) – and Sun! During winter! So fun!”

Thanks for reading! Keep up to date with The Dirt interviews by signing up for our newsletter.